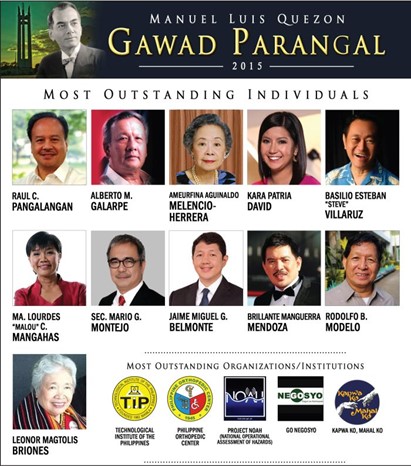 Eleven individuals and 5 institutions received this year’s Gawad Parangal Awards as Quezon City continues with its tradition of honoring outstanding individuals and institutions that have made achievements that inspire and exert a positive impact on society. The award recognizes exemplary, responsible partners in building the city and the country whose standards of service and performance are largely unsurpassed.

The event was held at the SMART Araneta Coliseum on October 19, 2015.
The awardees have varied interests and passions and cover multiple areas – from governance; social work and community development; media, entertainment and cinema; arts, culture and literature; medicine, science and technology; to business, humanitarian works, education, sports and the judiciary. Their contributions are just as diverse.